A Media Literacy Series
‘Unplugged’ is a blog series by the New Jersey Coalition Against Sexual Assault that critically observes, analyzes, and deconstructs various forms of media through the lens of our media literacy prevention strategy. It is important to note that everyone interprets and consumes media differently and our analyses are just one interpretation of many.

The Avengers franchise has become a staple of family movie nights in our household. Over the years, we have argued about which heroes are the best, who we want to be, and who gets to be which hero for Halloween. We’ve also used these movies as a tool to talk to our children about the social norms that uphold violence, and how to be critical consumers of media while still enjoying the stories they tell. This three-part mini-series will explore the ways in which the Avengers support, challenge, and transform social norms and values that contribute to sexual violence, and will provide parents and caring adults with ways they can use their family’s favorite stories as one strategy to prevent violence in the next generation.

For part one of this series, we will explore the ways in which the original male heroes have developed, how they manifest masculinity, and how they have challenged or accepted the harmful norms that contribute to sexual violence. 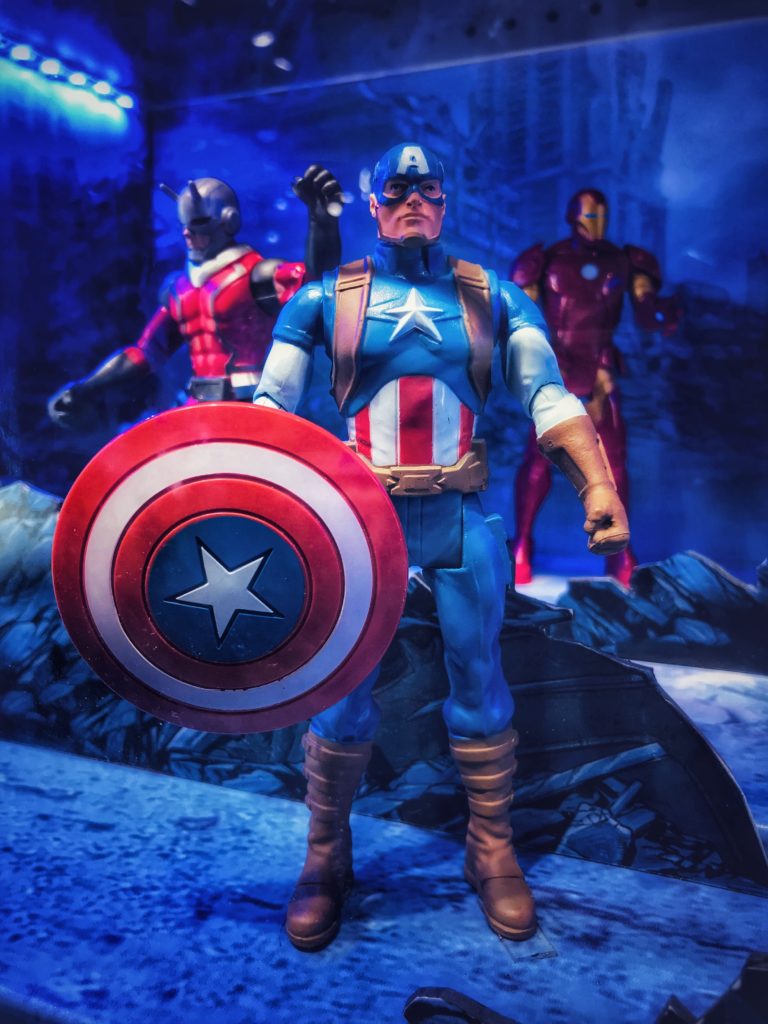 Steve is one of the first Avengers we catch up with five years after the snap. He is leading a grief support group, encouraging people to integrate their losses into their lives so they can find a way to move forward. Toxic masculinity demands men hide their grief. The reasons behind this may vary, and they can include things such as:

Steve pushes against the rigid ways in which toxic masculinity dictates how men cope with the grief by openly sharing the pain he experiences, how he struggles, and sitting in solidarity with other people’s pain.

Steve and Natasha (aka Black Widow) also appear to be the two Avengers who have maintained the most contact with each other following the snap, providing friendship and emotional support to each other. Steve demonstrates what it looks like to support a person through their grief, without overstepping boundaries and assuming they know what’s best for the person. Men who have internalized toxic masculinity may feel the need to solve problems for other people, which is a response born out of a sense of superiority. Steve is clearly concerned for Natasha’s well-being, but he’s never seen pushing her beyond her own comfort or ability. He is able to be present with her, accept where she is on her journey, and know he doesn’t have the right to tell her how to cope with her grief.

Steve demonstrates what masculinity looks like when empathy is the driving force behind it.

Tony approaches his grief following the snap in a way demanded by toxic masculinity: alone. Tony internalizes self-reliance as a core value, which could be a contributing factor to his mental health struggles. Tony copes with his trauma and grief in the ways consistent with harmful norms traditionally associated with masculinity, including alcoholism, lashing out, and suppressing his feelings. This only exacerbates the very issues he’s struggling to deal with. Tony’s arc ends with a redemption story, where he sacrifices himself to save humanity from Thanos, but it doesn’t fully explore how the decisions Tony made over the last several years lead the Avengers to being vulnerable to Thanos’ success to begin with.

The Hulk is a representation of toxic masculinity in one of its most dangerous forms: male rage. The Hulk only appears when Bruce has “lost control” of his anger, unleashing a beast that destroys everything around him. Anger is one of the few emotions that’s socially acceptable for men to express. Early in the franchise, Natasha Romanoff was a love interest for Hulk and has been the only one who could talk the Hulk down, giving control back over to Bruce. The dynamics of this relationship echo those of domestic violence, particularly with the violent assault of Natasha by Hulk in Avengers: Age of Ultron.

When we meet up with Hulk in Endgame, he has completely changed from two distinct personalities who resent each other, into a completely developed being. This process required Bruce to acknowledge the fear he had of losing control of himself, of the Hulk’s anger, and his resentment at being unable to control Hulk.

Bruce pushed against toxic masculinity by taking personal responsibility for himself, rather than expecting another person to heal him, and this is ultimately what allowed him to integrate all the aspects of his personality.

Clint Barton, aka Hawkeye and Ronin

Endgame opens with Clint and his family during a backyard picnic in which his family vanishes in The Snap. We don’t see him again until Natasha tracks him down in Japan to rejoin the team. We know in the five years since The Snap, Clint has gone on a violent rampage, killing anyone he believes was unworthy of surviving The Snap. Clint is the embodiment of modern-day gun violence and white supremacy. His targets are all People of Color, with a Mexican cartel mentioned early in the movie and then the audience witnessing Clint massacre what we’re lead to believe is a Japanese gang. Clint’s violence against People of Color mirrors a lot of criticism of American imperialism. This is particularly true with the scene in Japan, a country in which American military forces have committed high rates of violence against the local population. Clint also invents a new identity, Ronin, which lifts elements of Japanese culture. This is an example of the ways in which toxic masculinity and white supremacy destroy cultures and people they deem inferior, while still using the elements of those cultures they personally enjoy. Given the lack of representation of People of Color in Endgame overall, Clint’s violence towards two populations who have historically been seen as a threat to the “American way” is a very clear manifestation of both toxic masculinity, white supremacy, and power-based violence in general.

Thor embodies how toxic masculinity harms the men who internalize it precisely because he doesn’t seek help for the traumas he’s suffered, and instead copes with his depression by abusing alcohol. Mental illness, completed suicides, and substance abuse are incredibly high among men, but men are still less likely to seek help than women suffering from the same issues. One factor is the way in which toxic masculinity expects men to “man up”, meaning handle their issues alone and never admit weakness or vulnerability. Thor embodies the wounded warrior who has carried tremendous responsibility for the well-being of others to the detriment of his own health and wellbeing. Toxic masculinity continues to harm Thor when he rejoins the Avengers as he continues to drink heavily, emotionally suffer, and his team mocks his body size rather than offer help for the unimaginable traumas and losses he has endured.

Thor has also clearly struggled with his sense of self-worth, which begins to heal when he successfully summons Mjolinar (his hammer) and proudly declares, “I’m still worthy!”

Thor confidently steps into battle alongside his team, demonstrating that body size, trauma, and depression do not make a man any less worthy.

Ultimately, the Avengers are stories about dedication to others, sacrifice, and protecting the vulnerable. These are all values consistent with healthy masculinity and are values many of us aspire to live by. Regardless, these stories still exist within the context of rape culture, and toxic masculinity influences how these stories are told. Just as the characters embody different types of masculinity, we can teach our children to do the same. We can teach them to think critically about who they want to be, the men they see as heroes, and to transform the harmful norms they’ve inherited into ones that will prevent further violence.

Devin Rojas is the Capacity Building Specialist at NJCASA and mother of three. In addition to contributing to the blog, she is also responsible for supporting NJCASA’s training and capacity building initiatives. Devin believes parenting has the power to change the world by raising young humans equipped to dismantle rape culture, and replace it with a world built on love and empathy.